The Kids We Called Granolas 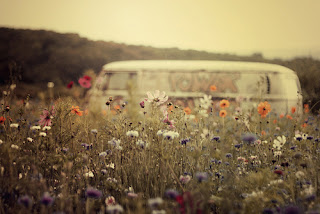 I was born in 1968. My earliest memories are from the early 1970s, when it seemed like half the grownups were hippies and the other half were sort of hippies. In kindergarten we sang songs by Cat Stevens and Simon & Garfunkel and from the musical Hair.

Back then my mother still had long hair and my dad wore sideburns. I remember one denim vest he often wore. It had funny pictures on it and on the back had the phrase "The eagle is a dirty bird." By the 1980s, their outlook had changed. They cared about money and cared about appearances. They had everything they needed and then bought all sorts of things they didn't need.

I left for college a week before my eighteenth birthday. I'd chosen a university 120 miles away, in the Pacific Northwest city of Bellingham. That was when I rediscovered hippies, or rather, a curious hybrid of suburban kid and hippie known as a Granola.

Granolas were university students also, but they shunned all the things we thought of as necessities: running water, indoor plumbing, electricity, washers and dryers, and clothes purchased in stores and not stitched by hand. The girls wore no makeup and usually had their hair in braids. They wore cotton blouses, long multicolored granny skirts, and workman type shoes. The guys had goatees and ponytails tied with hanks of twine. They wore cotton work shirts and pants held up with suspenders. On their feet were sandals known as Birkenstocks, which we, non-Granolas, called Jesus Shoes.

They seemed, at all times, starry eyed and earnest and underfed.

I had seen photos of Depression-era Hoovervilles but never expected to see anything like them in real life. The long road which led to our dorm went right past the plot of land the Granolas called home: they called it The Outback. There were a half dozen shacks made of salvaged materials. A smaller shack sat off to the side: it was an outhouse, complete with carved half moon on the door, just like in a cartoon.

The shacks were in the middle of an overgrown field where goats roamed and often got loose. The same half-assed carpentry used on the shacks had been used on a skinny fence that surrounded the place and the kids who lived there could often be seen laughing as they chased their goats back to where they belonged. We sat in our cars, amused and worried, and waited until the goats decided to get out of the road. We'd watch those kids and wonder how they got that way. We'd laugh at them and they'd see us laughing and would raise a hand in a friendly wave anyway. We'd wave back, confused.

I hadn't planned on dating one of them. In my defense, he was good looking. He enjoyed talking about their lifestyle: how they used only natural products, either purchased at the local co-op or made themselves. "Made themselves" was a strong theme: meals, clothes, any item they might need. They had gardens and ate what they grew with their own hands. They avoided anything with chemicals: deodorant, for instance. Why cover up a person's natural smell, he would ask, and I would force a smile on my face. It was hard work.

It got worse when he described the women. They used no feminine hygiene products at all. This confused me as I wondered how all the girls just stopped having their menstrual cycles but he clarified: they didn't "stop the flow," they let their menstrual blood flow right down their legs so it could "replenish Mother Earth." I fought the urge to vomit when he told me that.

The guys and girls lived in co-ed fashion, and practiced free love, just laying with whomever and changing partners around as they saw fit. There was no jealousy, he claimed, because possessiveness was bad, just like aerosol cans or preservatives in food. He invited me to visit their land and I told him I was too busy studying.

No hippie lifestyle for me, thanks. I stuck with what I knew and dated guys whose parents had picked out their majors for them. By my third year I lived off campus, sharing a house with nine other kids and I worked in a coffeeshop where I was the only nonhippie employee.

There are moments that stand out for me about that job. I remember one girl looked me up and down and told me I looked like the cover of Seventeen Magazine.

When these girls would comment about a war, I was confused.
"There's no war going on," I told them.
"There are wars going on every day, in countries all over the world," they told me.
And there were.

Soon I found myself reading food ingredients more carefully than before. I started buying products that had less packaging: reduce, reuse, recycle. Within six months I had become a vegetarian. A month after that I tried going home for a visit with my parents.

My mother made a face when she saw me. "My God, go put on some makeup, you look unwell!" she said. I told her I was wearing makeup, just not as much. She refused to let us leave for the grocery store until I agreed to put on lipstick.

At dinner, she ignored me when I said I didn't want any roast and my dinner plate had a piece of animal flesh with actual blood running into my potatoes. Or at least that was how it looked to me. When I tried to complain, my mother said "That isn't blood, it's the meat juice."

"If someone sliced off a piece of your skin, would it make juice or blood?" I asked her.

"That school, I knew it was a mistake. Too much thinking is bad for you," she told me.

The only answer I got was an angry look. By the end of the weekend, we were all kind of relieved the visit was over.

It went on like that for a while. I wore only clothes made of natural fibers. I sometimes delighted with picking a wildflower and tucking it into my hair.

But it only lasted for a while.

Gradually, I started eating meat again. I bought whatever products I wanted and figured someone else could save the Earth and not me. Besides, I'd never gone full hippie. I'd kept on shaving my legs even when the coffeeshop girls teased me about it. It wasn't like I was a man and could have my body look like it was meant to look. I was female. I had to change it so it would look acceptable.

After all, it wasn't like I lived in a shack and chased goats. Not like those Granola women, the ones we laughed at, the ones who looked so happy.


Amie Ryan is the author of essay collections GREEN SHOES MEAN I LOVE YOU and STARFISH ON THURSDAY and the Marilyn Monroe biography MARILYN:LOVED BY YOU. To learn more about her books please visit www.amieryan.com