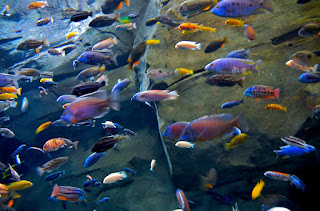 I used to hope I'd meet The One. Years of dating weirdos cured me of this notion as I came to fear each of them might indeed be The One and I'd be saddled with him until the day I died. Thus I came to embrace my single status, being thankful that any guys I dated were just on loan and that no paperwork had been signed. My friend Steve refers to my dating technique as Catch And Release.

Consider the following: the one who complained "Why do you always have to be thinking? Why can't you just sit there and not think?" He then specifically compared me to the Scarecrow in The Wizard of Oz, which temporarily led to a minor side argument about whether he meant pre-brain or post-brain. He clarified it was when the Scarecrow was singing about how if he got a brain he'd think and think some more. That, he said, was my problem. Thinking and then thinking some more. It bothered me he was dissing me for this reason and that he was using the Scarecrow to do it, as anyone can tell you the Scarecrow is the one Dorothy missed most of all.

There was the one who bragged to me about how, with his personal tragic background, he should rightfully be a serial killer. He considered this to be an asset, that he wasn't one, and this led to an argument with me insisting people are supposed to NOT be serial killers and that it isn't a bonus to NOT be one and him being irritated I didn't appreciate his non serial killer-ness, since it was the best thing about him. Then I realized it kind of was.

There was the one who worked as a mime. Yes, that kind of mime, there is only one kind. I freely admit, when I'd spot him working on a streetcorner I'd cross to the other side of the street, pretending not to know him. He claimed this behavior was unsupportive of his art. I'd claim not to have seen him and would suggest he just shout my name the next time. "You know I can't DO that!" he'd say, and I'd say "I know." He also did the mime thing whenever we had a disagreement, sometimes pretending to be me acting tough (hands on hips) or him acting sad (hands clutching what we imagine to be his breaking heart) and sometimes I would get into it and cock my finger and pretend to shoot him and then he would fall down like I had. When this started bringing me pleasure, I decided it was time to move on.

I dated one guy for the single reason that he looked exactly like Charles Manson. Not that I have a thing for Charles Manson, I think he's a dangerous criminal and I don't find him attractive or unattractive. Still, it was terrifically amusing that I could describe my guy as looking exactly like Charles Manson and then later, when my  friends would see him, they'd exclaim "My God, he really DOES look just like him!" He taught me to appreciate Led Zeppelin but soon there was a bustle in our hedgerow: he refused to hold a job. His skills seemed to be drinking coffee at Denny's, playing video games, and drawing endless paisley patterns with magic markers.

And so I remain single, so far not finding The One but finding many amusing Ones that at least are good for free material after the fact. As a writer, that sometimes seems like a pretty good trade, especially when you factor in that, as a single person, I can be as bizarre as I like. This could easily translate into artistic genius or just make me a weirdo, time will tell. Still, it's nice to be able to have cake for breakfast and do laundry only when I can no longer find any clean clothing items. Actually sometimes I just buy new clothes instead of doing laundry at all. I'm single. I can do that and answer to no one. I can talk to telemarketers in scary monster with a British accent voice. I can sing Stevie Wonder songs as loudly and as badly as I feel like, any time I wish.

One thing does make me immediately wish for a husband and that is seeing a spider and wanting someone else to kill it. For spider killing alone I would be willing to put up with a man one day a week (but not seven) but this would also have to involve me being able to push a button and have him disappear, Star Trek style, as soon as the insect was gone.

The Fish Thrown Back is one of the 23 stories featured in Starfish On Thursday, available at www.amieryan.com in both paperback and ebook versions.