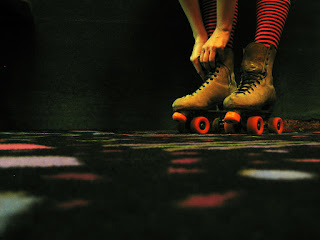 When I was 13 every girl on the planet had a boyfriend or at least that was how it seemed to me. The women I saw in the movies and on TV all seemed to be about 18 and were gorgeous and thin and seemed to have their pick of guys. I wondered what it would be like to be adored by someone.

My friends and I loved to go to the local roller skating rink. Hit songs from the radio would be thumping from overhead speakers while colored lights flashed in patterns on the rink and the skaters inside of it. I’d see couples skating hand in hand and would wish that could be me. It was 1981 and I remember hearing a lot of Foreigner and Joan Jett and a song called ‘Into The Night’: a one-hit wonder that was the perfect catch-your-breath slow dance song. It featured a 33 year old singer named Benny Mardones telling us about his love of a girl “just sixteen years old.” The chorus was my favorite part:

If I could fly, I’d pick you up
I’d take you into the night
And show you a love
Like you’ve never seen, ever seen.

The boys I went to school with hardly noticed me at all. Still, each day I put on my Love’s Baby Soft perfume, imagining it made me more grown up. I even had the T-shirt that came with the perfume. It was pastel pink with a picture of a blue bow and read I’M BABY SOFT, a slogan I found a little confusing. I spent all my babysitting money on makeup and tried to look older than I was.

My best friend Rosalyn and I had decided 16 was the very oldest we could pretend to be. Really it was the perfect age because high school boys would think you were only a year or two younger than they were.

One night at the roller rink I decided on a strategy to make a cute guy ask me out. When I was on the carpeted side of the rink I’d skate at top speed and accidentally on purpose plow right into the guy as he sat on one of the circular benches. This would make me land right in his lap and I’d giggle and say I was sorry for being so clumsy. To me, this seemed like a genius plan and so I put it into action. The guy I’d noticed looked a little older, maybe 16 or 17, thin and blonde. I put on the speed and crashed into him.

Into his lap.
Giggled.
Said I was sorry.

And he gazed at me like I was the most gorgeous thing he’d ever seen. He said his name was Nathan and he asked me out and waited as I wrote down my phone number.

Everything the songs had taught me was coming true, not Someday, but right then. We even skated hand in hand, the way I’d seen couples do, and he stroked the back of my hair with his hand, just like a guy might do in the movies.

He mentioned he went to the local high school and so I lied and told him I was 16. A lot of my friends had big brothers in high school. They did things like play basketball in the driveway and would ruffle your hair and call you Squirt. The age difference didn’t seem like such a big deal. Of course, I’d have to eventually tell him the truth about how old I really was, but I thought it could wait until he was safely in love with me.

When it was time for my mom to come pick me up, he gave me a hug goodbye and his cheek felt rough against mine. That’s when I noticed he was old enough to shave. Of course I didn’t mention him to my mother; she wouldn’t have understood. I could tell just from looking at Nathan what kind of amazing person he was but my mom would probably wreck everything. All the way home I pictured his face.

For the next four nights he called me and I made sure to get to the phone before anyone else could. He told me he’d always dreamed of meeting a girl just like me. He asked me if I believed in soul mates. He said he thought he was falling in love.

Then I felt a little guilty, because I’d lied to him and you shouldn’t lie to someone who loves you.

And then he laughed softly and said that was okay because he needed to tell me something too.

And he said “That’s okay. In fact, that’s good. That makes me really excited actually.”

I looked at the phone in my hand like it was a cobra. I was terrified. My next words came out loud and fast:

“You can’t call me ever again. And if you do, I’ll tell my parents and they’ll call the police!”

I slammed the phone down and my hands were shaking. I was grateful no one else was home. I was blinking back tears as I turned on the TV to watch American Bandstand, where everyone looked so cool, like they didn’t have any cares in the world.

Amie Ryan is the author of essay collections GREEN SHOES MEAN I LOVE YOU and STARFISH ON THURSDAY, and the Marilyn Monroe biography MARILYN: LOVED BY YOU. Find out more by visiting www.amieryan.com