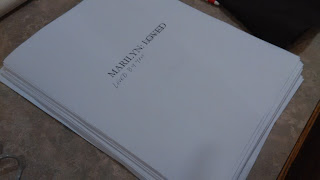 I found there were several difficult areas. The first was finding out everything I possibly could. The second was sifting through a hundred different versions of truth and untruth and digging for the accurate versions and then doublechecking I had them correct. The third involved two different areas of very tricky timelines: one for the order of the different homes Marilyn had lived in as Norma Jeane, and one for the events of her final day and the time frame of those events.

Once I realized how big this project was, I had a period of about two weeks when I kind of froze. I drove everyone crazy for a while and then I got to work.

Also, I had mentioned this project on Twitter and one day found a member of the Kennedy family had started following me for no reason.

I found I could almost write a separate book just going down the list of incorrect facts many readers, including myself, had heard. This was frustrating, as I wanted a book about what HAD happened, not what hadn't. If I stepped away from the pace every other page to say: so and so said this but this is the accurate version, it would make the pace come to a screeching halt and then the reader would have to get back into the flow again, only to be re-interrupted over and over. I had read many Marilyn biographies that did just that and they were frustrating to read. 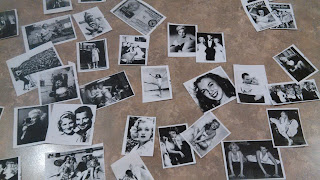 Choosing photos: impossible task.  I tried to use some that I thought fans hadn't seen before. One of my favorite photos in the book is an unstaged picture of Lauren Bacall, Betty Grable, and Marilyn, sitting on a couch and looking like any three women just having a great time. 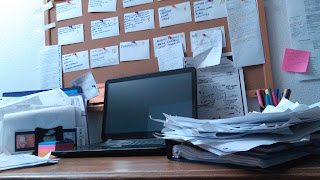 As you can see, this project sort of took over my apartment! The slips of paper above this bulletin board were all quotes I was considering using-some from Marilyn, some from other people. Mid way through this project I mentioned the name Marilyn Monroe to a cab driver in his late twenties and he said "Marilyn Monroe...now which one was she?" and I knew I needed to finish this project.

Most of all, I wanted to create the kind of Marilyn biography I myself wanted to read and could not find. I wanted to cover her early years while being aware readers would want to get to the good stuff. I had noticed many Marilyn biographies sounded like they were written by people who didn't like her all that much. I wanted this one to sound like someone did. 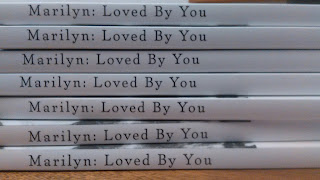 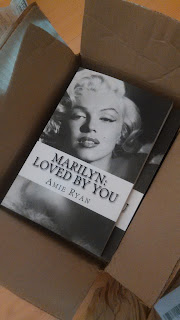 Also I don't mind confessing that during the six or so months I spent on this project, I often found myself singing her songs and accidentally over-enunciating words in casual conversation. I have mostly stopped doing that.

One of the things I hoped to accomplish with this book was to help younger fans of Marilyn (people in their teens and twenties) accidentally learn some history (about the Great Depression, about the Hollywood blacklist, about women's rights, and more) to give them a much clearer feel for what life was like back then and how different things are today. After all, when you read someone's story, you tend to form opinions about their choices. It's only fair to factor in the things that affected those choices.

It's my hope that people who may have already been fans of Marilyn Monroe will find brand new things to like about her. The title was originally a reference to her song "I Want To Be Loved By You" but I also wanted it to serve as a quiet suggestion to the reader about how I hoped they'd feel about Marilyn when they finished the book.