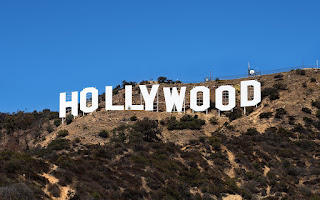 When my book STARFISH ON THURSDAY was optioned, I had hoped it would be greenlit for production. Unfortunately, by the end of the one-year option period, this didn't happen.

I decided it was time to be proactive.

This was easier said than done. Dabbling in an industry where people can make a lot of money also means you can get sued for a lot of money. So where to begin?

Step One: Don't be a dumbbell.

What that means is decode the terms, find out the rules, and protect your work.

Before you enter into any agreement, make sure it doesn't violate the terms of any current agreement you have with someone else.

If you get good news, especially if it involves money, stop everything and consult with an attorney who specializes in entertainment law. Most attorneys will give you the first consultation for free.

Don't assume you understood the rules the first time. George Harrison assumed he knew how to write a song and he lost his court case.

I decided to write a film treatment to send to casting directors and producers. Prior to this, I had only written a logline and summary for the Starfish project, and Taleflick had written a page pitch.

A logline is a one or two sentence summary that tells what the story is about, who the main character is, and what they're up against. Think of any TV series or movie you've ever seen and  try to summarize it this way in 2 sentences. It's hard to do.

When I pitched Starfish for Taleflick, I didn't realize I'd have to come up with a logline. At first I was stumped and then I tried out several ideas and each time realized I needed to condense it more. The finished version I sent in was this:

That final version surprised me, but it did the trick.

This week I wrote a film treatment for Starfish. A treatment includes the title, logline, character descriptions, and a detailed synopsis of the story. The length of a treatment can vary between 1-50 pages but from what I could gather, unless you're a famous hotshot, most people won't read it if it's longer than 10 pages. My treatment came in at 6 pages.

I was able to skip the step of getting permission of the author of the book because I'm the author and sole owner of the intellectual property.

Prior to sending the treatment anywhere, there's another step: registering the treatment with the Writer's Guild of America (WGA). If you skip this step, most legitimate people won't read it and it puts you at risk for someone stealing it and claiming it as their own.  Registering a treatment can be done online: it takes 5 minutes and costs $25. The WGA gives you a registration # and that goes right on the treatment itself.

This doesn't absolutely guarantee you that someone won't try to steal it, but registering it (with the date, your full legal name, address, phone number, and driver's license number or social security number) gives you enough to prove your case pretty well.

The next step: sending it out to studios.