On TV Everyone Dies 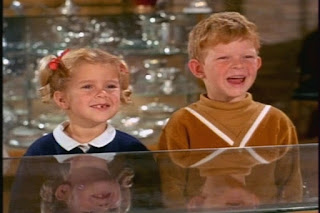 I've been spending a lot of time watching reruns of old TV shows, which some claim is a good activity during stressful times. The theory is if you've already watched the TV episode or movie, you know what's going to happen next, and this is calming.

Except I was watching Eight Is Enough and thinking how the mother dies on that series and it occurred to me there were a LOT of shows where at least one parent had died. I could name 4 or 5 off the top of my head and then I kept remembering more. The length of the list may surprise you. It may make you say, what was the deal with all of these parents dying left and right? Why was this such a popular storyline?

The word 'popular' may seem wrong, but what other word can be used if the writers kept coming up with it to create prime time TV shows? Were they all working through deaths in their own families or did they wish their parents had died?

Some of the shows I recalled were old ones, from the 60s: The Andy Griffith Show, The Courtship of Eddie's Father, My Three Sons (which was a triple: Steve's wife plus both parents of Ernie), and Family Affair (a double: both parents of the three kids die, which is why they're being raised by Uncle Bill).

Then by the 70s the trend continued: The Brady Bunch (that one, as you recall, was a double --Carol's husband and Mike's wife), The Partridge Family, Good Times (with the most memorable TV grief moment going to the mom, played by Esther Rolle, as she smashed the punchbowl and said "DAMN! DAMN! DAMN!")

I hesitate to include Little House On The Prairie because, as you know if you watched the show, it takes place back when life was godawful and people really DID die left and right, so it made more sense. If we include this show, it was a quintuple (Albert's mother, Jonathan Garvey's wife, Sylvia's mother, and both parents of the Cooper twins).

Laverne and Shirley makes the list because Laverne's mom had died when she was young. Diff'rent Strokes was a triple (Mr Drummond's wife plus both parents of Arnold and Willis). Webster was a double (football player's kid is orphaned and adopted by a teammate), Gimme A Break, My Two Dads, Eight Is Enough, The Facts Of Life (Natalie's dad) and Who's The Boss were all singles.

More: The Nanny, Silver Spoons, and Party Of Five, which was a double. I'm probably forgetting a few, but you see my point: this is a LOT of dying. And based on the fact you probably recognize many of these shows, we kind of have to say this was a popular theme. Why? We may never know.