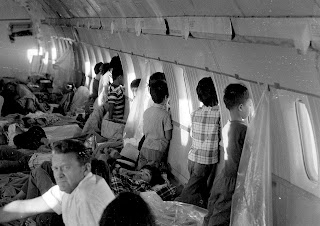 When I was 20 I spent a summer working as a preschool teacher. One of my coworkers was a guy a year or two older than me. His name was Larry, and when he had been a young child, he was one of the more than 3,000 babies and children airlifted out of Vietnam between April 4 and April 19, 1975. He was a very outgoing, good looking guy, and he spent a lot of time working out; his torso was as chiseled as you could want, but he walked with a cane and had a very heavy, uneven limp. The polio vaccine that had been routine for kids in the USA like me had not been available for him, and polio had left his legs crooked and spindly; one of his legs worked overtime to bear all his weight and the other was of almost no use to him at all. He was used to his handicap. For his senior prom he switched out his regular cane for a fancy one and wore a top hat. He seemed to want people to not make a big deal about his legs, but sometimes when I'd see him looking tired (and trying to not look tired), I'd think: one sugar cube with the polio vaccine and his whole life would have been different.

I know some people have been uncertain about getting the Covid vaccine. I got it as soon as I was eligible. Where I live people take whichever one is available. I happened to get the 2-dose Moderna, and I can report it really wasn't bad at all. The shot doesn't feel GOOD, it's a shot. For me, it hurt the same amount as a tetanus shot. The first one made my arm sore for a day or two. I could still use it, but it was sore. No other side effects at all. Then, 28 days later, I got the second shot and it hurt less. Before each of the two shots I was asked a series of questions about my history of vaccines and if I'd ever had allergies to any of them or to any medications or foods. After each of the two shots, I had to sit in a waiting area to be sure I had no bad reaction to the vaccine. I was advised that after I got home, if I moved that arm around every couple of hours, it would help prevent soreness, and this worked really well. The first day I had a mild headache that went away with Tylenol, and I felt pretty tired out. The second day I had the same mind headache plus about 15 minutes of chills and my temperature went to 100.02 F. Two tylenol and 30 min later and my temperature was back to normal and the headache gone. I was still tired out. The third day I woke up feeling great, with a ton of energy, and I cleaned my whole apartment while belting out Diana Ross songs. So there you go.

I know some people are immunocompromised and can't get the Covid vaccine. But for the rest, I have to say I was motivated to get the vaccine for two reasons: one, I don't want to die of Covid or even get hospital level Covid, and two, the idea that I could accidentally give someone Covid and cause them death was unthinkable to me.

Some people are counting on the herd immunity theory. Here's the thing: you can't GET to herd immunity unless 70% of the people get the vaccine. Once you factor in the immunocompromised people who absolutely cannot get it, that means there are very few chairs left for anyone to sit this out. And if you're in the US, you know we're fortunate to have the vaccine available when so many people don't.

Anyway, that's my PSA. One more thing: one very cool thing about getting the vaccine is you get to secretly feel like a hero, and how often do you get to feel like that?