The First Time My Mom Was Dying

In each of my three essay collections I tried to add something extra. In Green Shoes Mean I Love You I added a recurring funny bit called ACTUAL QUOTES BY AMIE'S MOM. In Starfish On Thursday I added a series of fictional letters. For my third collection, Secrets From The Star Jar, I made the extra a longer story told in installments. I'm including the first installment here. 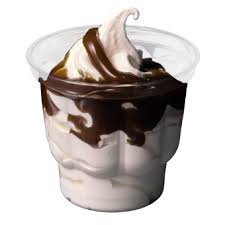 THE FIRST TIME MY MOM WAS DYING

My mother asked me if we should go get a treat. "How about a sundae at McDonald's?" she asked me. "Yeah!" I squealed. I was six. I already knew which kind I'd get, too: hot fudge.

Later, we sat in the middle of that sunlit McDonald's, the hum of cashiers at one end, the happy chatter of kids all around. My mother sat on one side of the table and I sat on the other, my legs too short to reach the floor. I swung them, happily, back and forth as I dug into my sundae.

And then my mom said she had something important to talk to me about. Even with that odd beginning, I didn't sense anything wrong. The sundae still tasted good for a minute.

"I'm not going to be alive much longer," she told me. "I'm dying." She said this with a relaxed smile on her face. If you hadn't heard what she had just said, you might have described her as looking happy.

I paused in my eating, not having an emotional reaction yet but organizing what I'd just heard. My mother looked normal: hair fixed, red lipstick on; she looked the same as anytime we went out. My mind ran through the different ways someone could die: an accident, a murderer, disease. But with an accident, you wouldn't know in advance. Same thing with a murderer.

So that left disease. I understood a little bit about diseases, mainly from watching movies on TV. Only a few months earlier I'd seen a movie called Love Story and the lady in that movie looked pretty too, right up until the second she died. Love means never having to say you're sorry. In fact the lady in that movie didn't even know she was sick until the doctor told her so. That's how it worked: a doctor told a person they had a disease and then the person said "How long have I got?" My mother looked pretty, just like that lady in the movie.

"Do you have a disease?" I asked her.

Her smile stayed on as she answered me: "No, I don't have a disease."

I detected something wrong then. I wondered if she was lying to me. I had stopped eating my sundae.

"I just always knew that someday when I was 32, I'd die," my mom began. "I can't explain it. I just always knew. And I turned 32 on my last birthday so that means it'll happen sometime this year."

Still with a smile, my mother began to describe how hard this would be for me. How much I'd miss her. How I'd remember every time I had sassed her or not eaten all my dinner and I'd wish so hard I could go back and be better, but it would be too late.

"Because I'll be dead, and you won't have a mother anymore."

She described all of the times when I would especially miss her: when there was no one to brush my hair or iron my clothes or fix me lunch. Imagine Mother's Day! Oh, she told me, that would be hard and sad. And Christmas. And my birthday! Easter. Halloween. Thanksgiving. She wouldn't be there for any of those days, ever again, for my whole life.

My TV knowledge was protesting this idea. "Can't a doctor do a surgery or give you medicine?" I asked her.

"No," she said, and she was definite. "If it was a disease then maybe they could, but this is a mystery so there's nothing they can do."

I was all done with that sundae.

That night in bed, and the next day at school, and for a year of nights and days, I imagined my future life without a mom. I wondered which day would be the day it happened.

And I did regret not being good every second. It never occurred to me to wonder if she would regret anything, like how often she hit me. My mother spent that year acting normal and reminding me often about how her time was almost gone.

And then it was her birthday and she turned 33 and we had presents and cake.

The next day I came to her, confused. She wasn't 32 anymore. She hadn't died. I wasn't sure what that meant.

"I know," she said. "I guess I'm not going to die right now after all. I guess it's just a mystery." She smiled at me.

I felt so angry. I'd cried about it a lot of times and she was staying alive. It was confusing. I wanted her to be alive. I should have been happy, not angry. I wondered if this was proof that I was a bad kid.

I wondered if my mom had been lying about it the whole time.
I wondered why she'd do that.

Amie Ryan is the author of Green Shoes Mean I Love You, Starfish On Thursday, Secrets From The Star Jar, and Marilyn: Loved By You. For more information, please visit www.amieryan.com